Normally the word contemplation is used to describe the mystical awareness of God’s action in a person, working through the Holy Spirit as they are being gradually 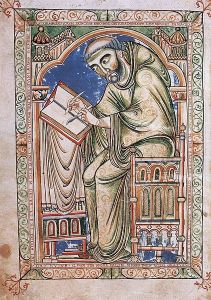 transformed into the image and likeness of Christ. It begins not when we so choose, but when he chooses. Although we can prepare for it, it is essentially God’s gift.

To begin with it is often called ‘obscure contemplation’, or ‘the prayer of faith’ or a ‘ray of darkness’. This is because at first, the action of the Holy Spirit only highlights all that separates us from the transformation into Christ that he is working to achieve. The ‘ray of darkness‘ suddenly becomes a ‘ray of light’ when God chooses, giving the believer ever deeper experiences of the presence of God within, as the journey into Christ deepens.

Another use of the word contemplation doesn’t come from the Christian tradition at all, but from the East, more particularly from India. Missionaries, who have been struck by the similarity between eastern mysticism and Christian mysticism, have imported an eastern concept of contemplation into our Western tradition. They claim that they are virtually the same and try to prove it by quoting the ‘Desert Fathers’, the ‘Eastern Hesychasts’, the ‘Cloud of Unknowing’ and other Christian mystical writers to make their point. Sadly they do not seem to understand that in the Western tradition the use of what they call a ‘mantra‘ is only suggested after it is evident to a competent spiritual director that God has drawn a person into ‘obscure contemplation’ and not before.

Although the slow meditative reading of the scriptures is the best of all forms of meditation, any other form that is helpful can be used to suit different inclinations and temperaments. In Christian meditation a person is something of an outsider looking at Christ, marvelling at what they see, being inspired at what he says and learning to love him for what he is and what he has done. But when this love reaches its climax, God takes the initiative by leading a person into a profound purification, through ‘obscure contemplation’, so that they can actually enter into Christ in a deeper way than ever before, becoming insiders. They may well have felt like bystanders before, but through the action of the Holy Spirit they are in the process of becoming participators, not just in Christ’s life, but in his action.

Now it’s only when this happens that in the Christian tradition, a person is taught to use a short sentence like the Jesus prayer, or a brief phrase as Macarius suggests, or a single word as suggested by the author of the ‘Cloud of Unknowing’. The purpose for this is, in the words of the ‘Cloud’ to keep our ‘naked intent’ on God at all times, so that he can enter into us more deeply to bring about the union for which the Holy Sprit has been sent.

The ‘Mantra Men’ hand out ‘mantras‘ to all and sundry without determining whether they are ready for them or not. This not only manifests their ignorance of the Christian mystical tradition, but should give a warning to all who are tempted to trust them, that they will ultimately lead them astray, not always knowingly, but through ignorance. Their inability to distinguish between Eastern and Western forms of mystical prayer is because, they have never understood their own tradition properly. When they teach people who have never prayed before, or who are beginners, how to use ‘mantras‘ they are generally highly successful to begin with. Both the method and the theory are so simple that anyone can follow them and they begin to practise what they call ‘contemplative prayer’ or ‘contemplative meditation’ immediately. They have not in effect taught them how to experience true contemplation, which is a gift from God, but a certain peace of mind obtained by the repetition of a mantra.

It is a form of mental yoga or self-hypnosis hardly dissimilar to the methods used in transcendental meditation except that a Christian mantra is used. Similar methods are actually employed in the National Health Service to help a person suffering from anxiety or tension by helping to induce a peaceful state of mind. ‘Contemplative meditation’, ‘Centering‘ or whatever else it’s called can certainly  enable a person to acquire a certain inner peace, but it is not mystical contemplation. The peace that Jesus promised at the Last Supper is far deeper, far more profound, it is the gift of the Holy Spirit and can never be obtained by man-made methods or techniques.

I have no doubt that they find it helpful to inject a certain peaceful tranquillity and order into their lives, but it will never enable them to lead ‘perfect’ Christ-like lives. Only the experience of the Holy Spirit working in them through genuine Christian contemplation can do that. However, real harm is done if it leads beginners away from the Incarnation which is central to our Christian faith. It does this when it leads them away from meditating on the life of Jesus that will, under the influence of the Holy Spirit lead to true Christian contemplation.

It can also cause terrible harm to those who, after persevering for long enough in meditation, are led into ‘obscure contemplation’ at the beginning of the mystic way. Finding themselves helpless and utterly unable to control their hearts and minds that endlessly plunge them into distractions the ‘mantra men’ seem to offer them the salvation they need. They immediately find that the use of a mantra helps and the assurance that this is the way the ‘Desert Fathers’ used to pray reassures them. Now precisely because the use of a mantra does in fact help, it leads them on more quickly to keep their hearts and minds together and open to the action of the Holy Spirit. The result is not however the peace of mind that the ‘mantra men’ promised, at least in the first instance, but inner turmoil. You see success means that the Holy Spirit is given free reign to begin the purification that must always precede the union for which they crave. Faced with a disciple for whom the recitation of the mantra has led to the opposite of what had been promised, the guru does not know what has happened or what to do. They begin to think and even suggest that there might be something psychologically wrong with them, or perhaps some past or present sins are preventing the tranquillity that their mantras usually lead  to. This can have a devastating effect on a person experiencing ‘obscure contemplation’ because it can confirm their worst fears and set them back for years on the journey that could be facilitated with understanding, compassion and genuine guidance by a competent spiritual director. At this point a person realises that the guru who first helped them can help them no more and they inevitably part company. However serious damage is often done by someone, who though they may well be wise in the ways of the East, is in effect ignorant of their own tradition.

The form of prayer that they encouraged, and the peace that they promised, is in affect the prayer of the humanist, and the peace of mind that they promised is the ‘apatheia’ promised by the Stoics to the person who becomes the architect of their own sanctity. In short, it is no more than ‘Pelagian‘ prayer that will not only confuse and mislead a Christian, but can do them irreparable damage. True Contemplative prayer, however, is so important for the future reform in the Church, as it has been in the past, that it must be protected from it’s counterfeit.

3 thoughts on “True Contemplation and its counterfeit – Part one”

Helping the whole family grow in intimacy with Christ

Living the Truth the Church Teaches

A Catholic Citizen in America

Following Catholic beliefs and practices in America: one man's experience

A Beautiful, Camouflaged, Mess of A Life

One Army Wife's Blog about her Catholic Faith & Parenting

Striving for holiness with a Catholic heart

..."If My people who bear My name, humble themselves and pray and seek My presence and turn from their wicked ways, I Myself will hear from Heaven and forgive their sins..." (2 Chron. 7:14) - "You will see that in prayer you will find more knowledge, more light, more strength, more grace and virtue than you could ever achieve by reading many books, or by great studies. Never consider as wasted the time you spend in prayer. You will discover that in prayer God communicates to you the light, strength and grace you need..." (Sr Lucia dos Santos)

Inspiration for living every day to the fullest!

Tracking events and trends in Israel, the U.S., Russia and throughout the Epicenter (the Middle East & North Africa)

Woman to Woman and Heart to Heart...helping each other on our journey

Field of Dreams: if you build it, they will come!
mother of nine9